Mitsubishi Electric has confirmed that it will show a 149” prototype OLED screen at ISE 2010. Believed to be the world’s first scalable OLED screen technology, the new system aroused considerable world-wide interest when it was revealed at last October’s CEATEC show in Tokyo. A world-leader in outdoor LED screen technology with its Diamond Vision screens, the company believes OLED has the potential to similarly revolutionise its indoor commercial displays business.

OLED screens create light by a process of electro-luminescence (EL). Each pixel consists of an anode and cathode separated by a thin organic membrane. Its simple construction means that the screen surface can be made extremely light and thin. Using specially-developed driver electronics, Mitsubishi Electric has created an edge-less OLED display module that can be joined together with others to create seamless screens of virtually any size and shape, including curves. The company believes this modular approach will deliver the versatility required of the next generation of indoor Digital Signage displays.

At ISE, Mitsubishi will demonstrate a 1920mm x 3264mm OLED display. At around 6.2m² - or 149” - this is considerably larger than any existing commercial product. A screen resolution of 1088 pixels x 640 pixels at 3mm pixel pitch delivers sharp, vibrant images, viewable even at close range.

OLED technology is extremely versatile and offers several distinct advantages over both LCD and LED in indoor applications: Unlike conventional LED systems, its slim, lightweight construction means that large screens can be installed on virtually any building surface. Unlike LCD or plasma, Mitsubishi’s OLED modules are truly edge-less so that any shape of screen can be created without visible borders. With a light output of 1500cd/m², the production model will be several times brighter than an average LCD display, making it suitable for indoor applications in relatively brightly-lit areas. Furthermore, because it requires no backlight, the contrast performance is far superior to LCD.

AC ter Meulen, Branch President of Mitsubishi Electric Benelux and Deputy Product Marketing Director of the EMEA Display Systems Group, commented, “We are absolutely delighted to be able to show this technology in Europe for the first time. This is an exciting product that underlines our commitment to the out-of-home displays business and demonstrates the significant advances being made by Mitsubishi Electric in developing the next generation of products to service this growing market.”

Mitsubishi Electric’s OLED screen is just one of a number of new products being shown at ISE 2010. The company will also be revealing a new LED-based projection engine for its Seventy Series display wall cubes, the L46XM, featuring a high-quality 46” diagonal WXGA (1366 x 768 pixel) LCD display with a total mullion width of 7.3mm, and a new Multi-Touch interface option for its Seventy Series display wall systems that enables multiple users to interact with a display wall simultaneously. 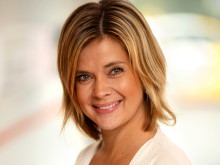